Loon frozen in ice is rescued by kind hands. 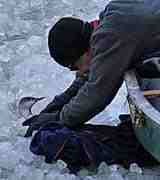 Kathleen Godwin was enjoying an unexpected Friday morning off at her Ransomville waterfront home when she glanced out the window and noticed what appeared to be duck, frozen in the packed, chunky ice on Lake Ontario.

“I was drinking coffee looking out at the lake,” she said. “We always check the ice in the morning and there was this bird — I thought it was a duck — and its head was lying on the ice. It looked so dead.

“My heart sank, imagining the struggle that the duck must have endured,” she added.

Then, around 3 p.m. strange shadows caught her eye. Outside her window, Godwin saw hundreds of small birds had gathered on the lawn.

“I quickly grabbed my cell-phone to take a picture when I noticed the frozen bird again. Only now I thought I saw it move. My fiancé grabbed the binoculars and affirmed that the bird was alive. It was, ‘slowly opening and closing its eyes,’ he said.”

Godwin knew that if nothing was done, the bird would surely die in the darkness of night, a few hours away.

Panicking, she picked up her phone and dialed the number for the Lockport SPCA, where she was directed to a local non-profit group called Wild Kritters. She looked up the group online and found the numbers for a number of volunteers.

After an hour and a half of trying to reach someone there, Godwin said she finally received a call back from Wild Kritters’ President, Kathleen Britton, who in turn called volunteer Bill Blake.

When Blake arrived on the scene, he was shown the location of the bird. At this point, the issue at hand was simple: How would he get across the ice to the bird without falling through?

First, he said, he had the idea to lay down a ladder extending over the bad ice to the bird, with someone standing on the end of the ladder on the shore to keep it stable.

It was then that he noticed a canoe lying next to the house and decided to use that to make his way across the ice. Once he got to the bird, it took about 10 minutes to chisel the bird out of the ice.

“I’ve had past experiences with rescuing different animals,” Blake said. “And the same thing always holds true, when you get to the animal, they know that you’re there to help them not to hurt them. You can see that in their eyes right away.

“So, naturally you put other things that are going on around you out of your mind. It’s just me and the bird. I put it in the canoe and wrapped it up and up to shore we went.”

Godwin watched as Blake made his way back to shore.

“He left the canoe on the ice for a minute. It was almost impossible for him, with the bird in his arms, to maneuver it,” Godwin said. Then Blake. in an act of incredible bravery, she said,  “just stepped out and walked on the ice and brought it into the house.”

Once the bird was in the house, Blake asked for a hair dryer and carefully melted the ice away from the bird’s delicate feathers.

Blake says after that the bird seemed happier and was starting to move around. Godwin was even able to get it to eat some of the fish fillet she had planned to eat for dinner that day. Then Blake put the bird in his animal carrier and took it to Britton’s home where the bird was allowed to swim for a while in her bathtub.

“She looked it up in her bird book and we knew within about 15 minutes that it was a red-throated loon,” said Blake. Originally from the Arctic, it had migrated to Western New York for the winter.  The next day, the loon was taken to the Erie County SPCA to see the vet.

“Excellent staff up there,” Blake said. “They took the bird right in and they took me in because I went and got it. I held the wing out while they took blood, they took x-rays, checked for frostbite, the whole nine yards. Like it was it was a person. I was amazed.”

Finally, when the loon was given a clean bill of health, it was released in a large open area in Wilson. The bird dove into the water and began to paddle away. Blake says that’s how he knew the bird was ok.

“I couldn’t rest until I’d exhausted every possible thing to do for this bird once I knew it was alive,” said Godwin. “I was amazed and thrilled that these volunteer names were (of people from) Lewiston, Youngstown, Wilson, all over the place.

“I thought this is wonderful. I’ve never lived in an area that there have been this many committed people to the other creatures that inhabit our environment,” she said, noting that she had recently returned to the region from Pennsylvania. “It’s really heartwarming.”

To thank Blake for his courage and compassion, her fiance, an artist, will be painting a portrait of him with a red-tail hawk he rescued named MacGyver.

Wild Kritters is a non-profit organization is comprised of state and federally licensed volunteers who are dedicated to rescuing injured or orphaned wildlife in trouble. The goal is to rehab the animals and nurse them back to health so they can be successfully released into the wild.

Wild Kritters is hosting its seventh annual basket raffle fundraiser at the 3F Club in Lewiston on April 21 from noon to 5 p.m. There will be food and entertainment for all ages. For more information visit www.wildkritters.com.

“Everyone is connected, its like that movie, ‘Pay it Forward,’” said Godwin.

“If you have an opportunity to do something to help someone and you feel the urge, by all means, do it.” she said. “If I were a bird stuck in ice someday, I would hope somebody looks out their window … and calls Bill.”