Out of the Drain 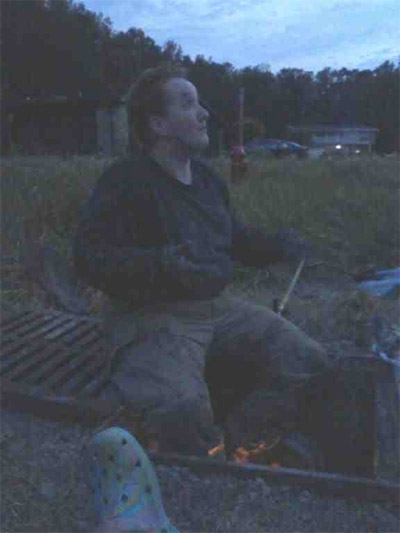 The neighborhood of Lasalle came together last spring when cries where heard coming from a storm drain. One of the residents called Wild Kritters to investigate. When our volunteers got to the location, they, too, heard the cries – the cries of baby raccoons. Looking around, they discovered a mother raccoon dead in the road. The babies had gotten into the storm drain. How? And how many? Neither question mattered. Our biggest concern and worst fear, how would we get them out? This three-day adventure truly was a test of our volunteers’ creativity and patience.

We couldn’t see into the storm pipes to know how many or where the babies were located. Knowing the mother was dead, the volunteers assumed the lil’ tykes hadn’t ate in a while. Perhaps a little food would coax them out. Luring some tempting morsels of food down the sewer, one crying voice emerged from a pipe, coming close enough for our rehabilitator to capture him and bring him up to safety. He was wet, cold, dehydrated and so very small. His mouth was covered with black dirt, mud, and sewer. He was having breathing difficulties and was immediately put into an incubator. Further attempts to lure the remaining raccoons to safety failed; at least for today.

Our dedicated volunteers went back to the storm drain. They knew that food alone would not bring out the remaining babies. Desperate measures were called for if these babies were to be saved. The volunteers took turns being suspended upside down into the sewer drain, 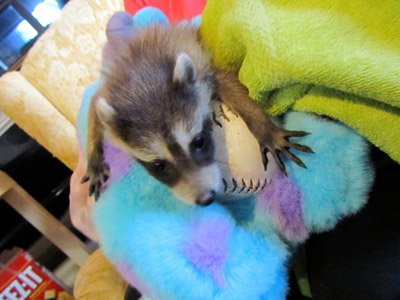 held on by their feet and a belt, as they surveyed which of the four pipes the voice were echoing from; still trying to coax the hungry critters into the open long enough to rescue them. Success! Baby No. 2 peeked out of a pipe. The quick reflexes of our volunteer got a tight enough hold on baby to bring him to the surface. He, too, had black soil and rock in his nose, mouth and lungs. Small, cold and dehydrated, he was quickly put into an incubator. But…..there was still one distant, cry echoing from the drain. We still had work to do. Yet which of the four pipes was the cry coming from? The pipes were too small for our rehabilitators to crawl through. We had to regroup, rethink and pray the baby raccoon would hold on. It was time for MacGyver!

MacGyver is our affection nickname for one of rehabilitators, Lori. Just like MacGyver in the television series, Lori has the uncanny ability to solve what often seems as an “unsolvable problem” using common, everyday items.

Once again, our volunteers went back to the drain. This time, however, we came “armed”. MacGyver had created an extra long, extendable pole with a net at the end; all held together with duct tape. Again the volunteers suspended themselves upside down into the sewer drain. Using the tool MacGyver created, we were finally able to reach deep enough into the fourth sewer pipe to net the last little voice from the dark – a female. Like the others, “Sophie”, as we call her, was wet, dehydrated and covered with muck; requiring immediately medical attention. 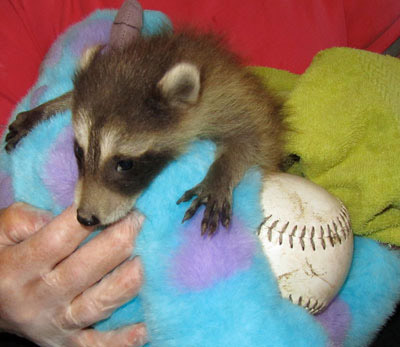 All three babies were very sick and small. Sophie survived her ordeal. Unfortunately her brothers did not. Sophie was too small and under nourished to be returned to the wild. She spent the winter with an RVS licensed rehabilitator in an outdoor enclosure. We are happy to say, Sophie is ready for release this March.

To the residents in Lasalle, we say “THANK YOU” for taking time to care for God’s creatures.

Did you know that raccoons eat mice and are part of nature’s clean-up crew? Without them, the environment would become unhealthy. Raccoons are also very clean animals and love the water. Yes, they do come out during the day. It is on the nice days throughout the year, a raccoon can be seen playing and teaching their young how to hunt and find shelter. So just because a raccoon is out during the day, doesn’t mean it is sick.