Wrapped Up in Fishing Line 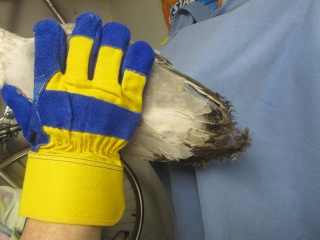 A wildlife rescuer went out on a limb to save a sea gull that had gotten tangled in a fallen tree at Hyde Park Lake in Niagara Falls on Friday evening.

Shortly before 8 p.m., the Niagara Falls police got a call about the bird.

“It was somebody in the park,” said Linda Clark, who answered the 911 call.

The bird was in a state of panic and causing a ruckus. The passer-by alerted a state trooper, who in turn called Falls police.

Clark knew to call Wild Kritters of Niagara County, a wildlife rescue organization, and wildlife rehabilitator Lori Burch, known as MacGyver by her colleagues for her innovative rescues, was put on the case.

Clark, who was getting off of work at 8 p.m., was already scheduled to meet up with her family. Her brother pulled up to the Police Department, and Clark announced: “They’re going to do a rescue down Hyde Park. Let’s get down there and see what’s going on.”

Linda Clark, her brother, Tim Clark, and her sister-in-law, Jean Clark, drove to Hyde Park and went down to the lake. Tim and Jean were especially eager to help because Tim had once rescued an injured hawk.

When they arrived at the park, it was already getting dark.

Burch got there at the same time.

Down in the lake, they could see the sea gull at the end of the fallen tree. It was tangled in fishing line and mostly in the water. While it had been flapping and squawking when the passer-by spotted it, the gull was now still and shivering.

“We figured it was exhausted,” Linda Clark said.

When rehabilitator Burch first got the call, she wasn’t sure she would be able to do the rescue that night. But when she saw other people were there and willing to help, she decided to try. 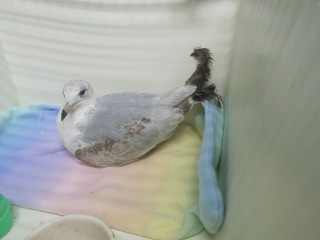 Burch set up a safety line and walked out onto the downed tree trunk as Tim Clark followed.

Burch got to the bird and saw it was completely tangled.

“He was bound up right up against the tree,” she said.

She cut the fishing line in three places to free the bird. She picked it up and could see it was still wrapped in fishing line. It also had a hook in its foot. She carefully handed the bird to Tim Clark, who carried it back to land.

Jean Clark said she could see that the bird had been traumatized.

“I was freezing,” Jean Clark said. “The poor little thing was shaking so bad.”

They wrapped the bird in a blanket and put it in a carrier, and Burch took it back to her home, where, like other rehabilitators with Wild Kritters, she takes care of her rescues.

The sea gull was soaking wet, a sign it had been submerged for hours, Burch said.

“We got him dried off and on a heating pad,” she said.

She removed the hook and unwound about six feet of fishing line from the bird’s body and legs.

“He was all bound up,” Burch said. “He couldn’t extend his wings.”

She then let the gull rest on the warming pad.

The sea gull made it through the night and was almost dry by morning, Burch said, when she fed it and gave it water.

Now, Burch said, it’s a matter of seeing whether the bird’s foot is infected and, later, whether it can fly. She said the gull will stay at her house for at least three days.

Burch said people often dismiss gulls as lowly creatures, but she believes they deserve to be rescued, just like any other animal.

“People forget . . . that we need animals to keep everything around us. What they eat and clean up would create a lot of unhealthy habitats for us, if they weren’t around us to keep things in balance,” she said.