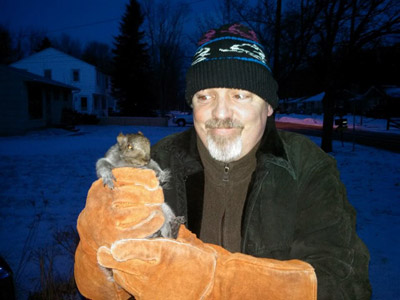 It was another cold day in January when the phone rang. There was a nice lady on the other end explaining that she thought she had a squirrel trapped in the vent going into her hot water heater. She went on to explain that this has happened before.  A couple of years earlier, a squirrel had been trapped in the same place and she didn’t realize then until it was too late and that squirrel didn’t make it. So this time, when she heard scratching and squealing coming from the basement, she pretty much knew what it was. She starting calling members of Wild Kritters and finally got a hold of Brenda and Shawn in Lockport.

After hearing the story of the past experience and what the situation was now, Shawn called Jim and explained what was happening. They made a plan of what they might need to get this poor little squirrel out of the pipes and then got their gear together and headed for North Tonawanda.

When we arrived at the ladies house she greeted us at the back door and led us to the basement. She pointed out where the problem was and sure enough, there was definitely what sounded like a squirrel, stuck in the pipes going right into the top of the hot water heater. 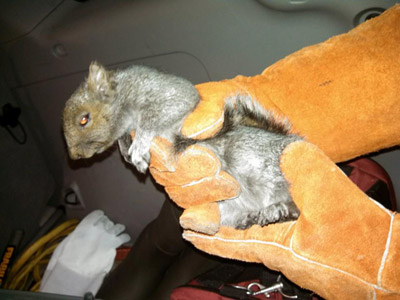 She explained how when this happened before, she called a heating & air guy who came out and got the squirrel out. It was clear that he cut an entire section of the pipe out to remove the squirrel. He put 3 bolt screws at each end to reassemble the pipe. This made our job much easier to retrieve this new visitor who got way more than he bargained for when he shimmied down this chimney.

It was clear that this little guy was very happy to be free once again.

The lady was very grateful that we were able to retrieve the squirrel, put her pipes back together, relight her pilot to the hot water heater and all within about an hour of arriving at her location. The best part was no harm came to the squirrel throughout this whole process.

The moral of this story is if you have a chimney, make sure you have a screen on the top so wildlife cannot come inside your home.