Lots and Lots of Birds 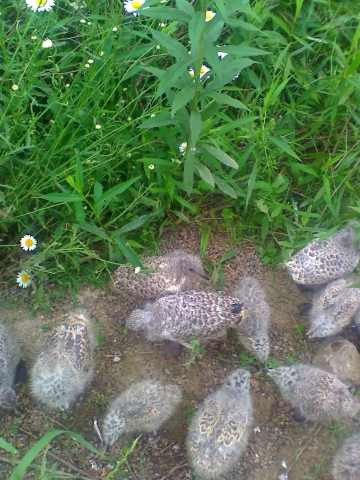 No matter how one might feel about adult seagulls – “wind rats”, “dumpster chickens”, “french fry thieves” – when it comes to the helpless, the babies, you can’t help but get emotional and get involved. This rescue would not have been as successful without the combined efforts of AWARE, Lakeview Animal Sanctuary, Mulvey Construction and the public involvement. We would like to thank all who took the time to lend a hand and cared enough to become involved. The following is Wild Kritters’ account of the events on that emotionally-charged day of June 9th and how it began for us.

On the afternoon of June 9th, Wild Kritters received a phone call from a concerned citizen. The caller stated that baby seagulls were being intentionally killed by the construction workers at the Lockport Mall. Since the rehabilitator was already on a call, she could not immediately respond. Instead, she took the information and contacted several other wildlife rehabilitation agencies in the area. After completing the call and caring for the injured animal, two Wild Kritters volunteers headed to the Lockport site. While in route, the Niagara County Sheriff Department, US Fish and Wildlife, and the DEC were contacted for guidance and as a precautionary measure. Upon our arrival, Lakeview Animal Sanctuary was on site, along with several law enforcement agencies, discussing the situation with Mulvey Construction’s site foreman. At approximately 3:30 p.m, construction was temporarily shutdown, permitting volunteers to enter the construction zone to assess the situation and remove the young birds. Volunteers from AWARE arrived on site and a plan of attack was developed on how to remove the baby birds. Two volunteers entered the construction site and retrieve the birds. The remaining volunteers waited outside the construction zone to received the birds, assess their injuries, and prepare them for relocation. Inside the construction zone, several dozen baby gulls were found running under debris, looking for shelter, as the adult gulls soared above. One by one, the gulls were captured and handed to the volunteers outside the site. By 5:30 p.m., the rescue operation was called to a halt. The high heat and humidity, combined with the trauma of avoiding capture, was adding stress on the babies. Thus the potential to do more harm, than good. Approximately 40 babies had been removed, but there were still dozens more that 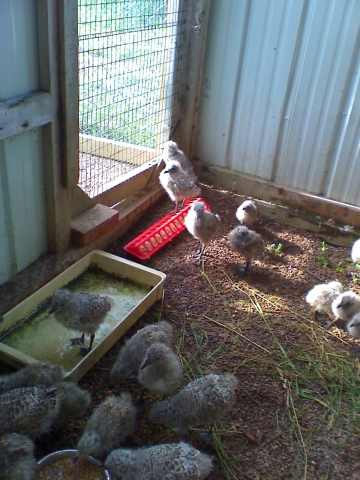 needed to be caught. The construction foreman agreed to allow the volunteers of Wild Kritters, AWARE and Lakeview Animal Sanctuary to return the next morning at 7:30 and continue the rescue mission.

When Wild Kritters returned the morning of June 10th, the construction crew had been on site since 6:00 that morning and captured 20 more baby gulls. Volunteers from AWARE and Lakeview also returned that day and they, too, removed even more babies.

By the end of the day on June 10th, an approximate total of 63 baby gulls were removed and rescued from the site. Out of those 63, six were taken to the Erie County SPCA Wildlife Division for medical treatment. The remaining gulls are being cared for by AWARE and Wild Kritters, both agencies have the necessary Federal permits to care for the birds.

We are all experienced rehabilitators, we have worked with seagulls in the past, but, to have this many babies at one time is a very unique situation. Wild Kritters has over 40 baby gulls in their care. (If the little rascals would sit still long enough, we could get an accurate count!) We are working with Joel Thomas, Erie County SPCA Wildlife, to develop a release plan for the birds, when they are ready to be returned to the wild. Joel is also working with Tri-State, a non profit bird rescue and research agency in Delaware to develop the release plan.

However, until the birds can be released, we must continue to provide food, shelter and care. Help is desperately needed.

How You Can Help 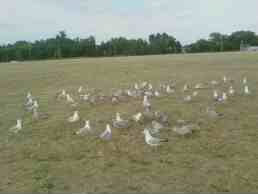 It’s true, a seagull will eat almost anything, but our mission is to return these birds to their environment as healthy as possible. So, sorry folks, french fries are off the food list! While in our care, their diet will consist of fish, mollusks, dry cat food moistened with water, and whatever worms they can catch. Donations of any of the above would be appreciated.

As the gulls get older, a bigger cage will be required. Extra fencing, wood, or even the skills to build the cage are needed.

Perhaps you have some extra time available and would like to get a “hands-on” involvement in the care. Sure! We’d love the extra hand or two or three when it comes to feeding time.

The seagulls were all released safely back into the wild.