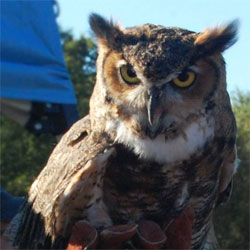 Charlie (aka "Choo-Choo" Charlie) is just about a year old. He was injured as a baby and needed surgery to pin his left wing. He cannot fly like he needs to in order to survive in the wild.

He got his nickname "Choo-Choo" from the clacking sound he makes. When an Owl feels threatened, they snap their beak sending a clacking sound to warn their approaching attacker. 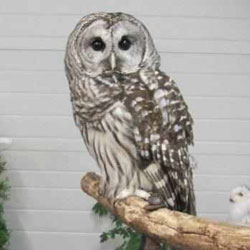 Bart is estimated to be about 10 years old. About 8 years ago, Bart was hit by a car and sustained a broken wing. He has had surgery to pin the wing. This prevents him from flying well enough to survive in the wild.

Bart considers himself a superstar, since he has a video camera in his cage. He'll bat his eyes and smile for any photo opportunity.

Like most superstars, Bart's cage is complete with amenities - a Jacuzzi tub, daily maid service and his own personal decorator and cook. 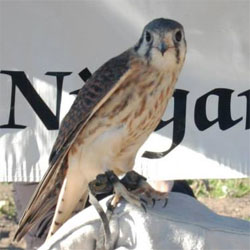 Jack was found in the City of Niagara Falls. He was lying on his back in a mud puddle, holding on to his wing. He was examined by a raptor specialist who determined he may have some ligament or tendon damage to the wing. Jack can fly, but he cannot soar to the heights needed to hunt.

To this day, when he is threatened or approached by his handlers, he takes a defensive stance - lying on his back, talons up, ready for a confrontation. 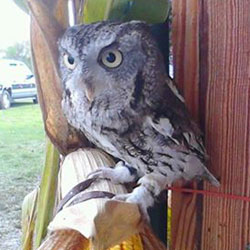 It was an early summer evening and I was fixin’ to get me some dinner. I was sitting in my favorite hunting spot, listening for my food. That’s right – listening for my food. You see owls have keen hearing; we can hear our prey rustling around under heavy vegetation and/or snow. In addition, our ears are not symmetrical on our heads. This allows us to triangulate our prey’s location by sound alone. Our sense of hearing is so accurate that there is evidence that even blind owls can capture live mice while in captivity.

After hearing and triangulating the location of my dinner, I flew off into my prey’s direction. Remember how mom and dad always say “look both ways before crossing the street”. I should have paid closer attention to mom and dad. For when I flew off into the dusk after my prey, I failed to see the car crossing into my flight path. I flew right into the car! Fortunate for me, a Niagara County Deputy saw the “vehicular assault” and brought me to Wild Kritters for rescue and rehabilitation. The volunteers of Wild Kritters took very good care of me. I had excellent food, rest and relaxation, and veterinarian care, but I felt I wanted to go home. The folks at Wild Kritters weren’t quite convinced I was ready for return to the wild, so they kept me for a few more weeks for observation and for one last medical appointment, an Owl Eye Doctor. Over those next few weeks, I earned my nickname – the Great Hoot Deannie – Master Escape Owl. Every cage, carrier or containment Wild Kritters could put me in, I managed to find a way of escape.

The picture to the right shows me hiding in the basement between some pipes. I sat for hours watching the Kritter people look for me...what a hoot! Look closely, you’ll see my evil smirk.

But the big day with the Owl Eye Doc Day, came soon enough. After some intense lights and tests, the Doctor determined I had some neurological damage done to the eye that prevents me from seeing depth perception. Perhaps that’s why I have a hard time landing on things when flying. I tend to over shoot the landing or the hunt. The sad thing – Doctor said I could not survive in the wild with my eyesight and depth perception. Once again, Wild Kritters stepped in and took care of me. I am one of their educational birds. I go around to various public events and education the public about me and my brothers and sisters. In exchange for showing off my gorgeous feathered physique, Wild Kritters keeps me happy, healthy, and safe for the rest of my life. 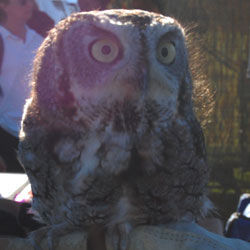